Vince Mcmahon: Robert Mugabe could have been the greatest manager in pro wrestling history. 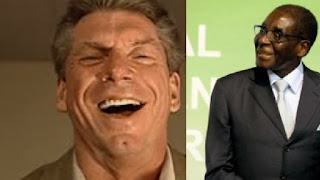 Speaking to a media briefing in the early hours of Monday Vincent Kennedy McMahon who is an American professional wrestling promoter and executive, American football executive, and media proprietor currently serving as the chairman and CEO of WWE, and the founder and owner of Alpha Entertainment made a shocking press statement that left a lot of people amazed.

In His press release the current CEO of World Wrestling Entertainment said Robert Mugabe who served as the second President of Zimbabwe for almost 4 decades could have been the greatest manager in professional wrestling.

His remarks comes as he said Mugabe who was one of Africa's founding fathers was a very brave and fearless leader. Mugabe was best known for not beating about the bush when it comes to African issues. He could confront western leaders with no fear telling them the truth as it is.

Mugabe defended the African identity for over 35 years taking his messages to the United Nations Assembly. Most leaders from around the globe enjoyed his speeches. They would laugh throughout the whole Mugabe segment. Vince said Mugabe's mic skills could have made him the greatest talker in the history of pro wrestling. Mr Perfect from Nyasha Nation asked which role would be the best if Mugabe was given a chance.

Vince said the late Robert Mugabe could have been great on the heel side rather than face. He also said if given a chance Mugabe would generate a lot of heat from the universe. Vince said," i would have loved to work with Mugabe as a heel manager for example managing people like The Undertaker". I totally agree with Vince since Mugabe was confident and fearless.

His voice could have been a plus since it was more of a caged lion that has been hungry for over days. I can imagine if Mugabe could have made it into pro wrestling,what a delightful legacy he would have left behind. Reporting from Nyasha Nation,Mr Perfect.

Disclaimer
This story is based on creative fiction