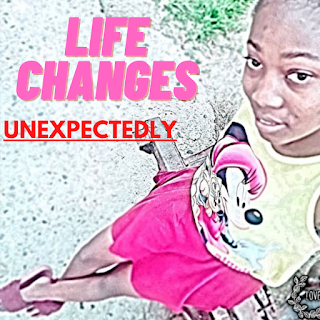 ln life,our destination comes in different ways depending on how you treat yourself.l was just left with one little sister Anisha.She was employed at Makumbe Secondary School as an accountant after she got her accounting degree at Nust University.

l was so proud of her on the day she was employed. Anisha at the age of 25 years old finally got married. Amazingly the two love birds witnessed their dream wedding.

Around my 27th year God blessed me  with twins.They were both girls.
l named them Beatrice and Beauty.Joy overwhelmed my better half on the day that l gave birth.He could not believe that he was finally a father. My aunt got sick after l delivered my precious twins.She tested positive to HIV and AIDS. Evil Aunt spent 5 years in pain after all AIDS does not have cure.

She suffered a lot before she passed away.She died after spending 5 years in pain and l was 32 years old at that time.  Before she passed away, evil aunt confessed everything that she did to my family.That was when l know that she was the one responsible for every problem that my family and faced.

In her confession she narrated and admitted to be the one who caused the accident of my father.She ordered the truck driver to crush my father's car when he was on his way back home from work. Evil aunt did this with intensions of taking my father's wealth.l also became to know that she was the one behind my mother's inprisonment.

I was down fonded when she told me that she was also responsible for the death of my brother.She also convinced my little sister Ashly to quit school.She threatened to end Ashely's life if she had not taken her advice.She was also the one who gave her the idea of having an illegal backyard abortion.

The sad thing about it was that l was in dark all that time until she confessed to me.She told me that her wish was to kill all the people that l loved because she hated me a lot.That day l also knew the truth about my identity.

Evil aunt then let me know that her brother was not my real father and that was the main reason why she hated me.She told me that my mother was let down with her first husband when she was pregnant.

Fortunately,she got married to evil aunt's brother before she gave birth to me and that was kept as a secret.She made the confession of my identity clearly.l always asked my mother the reason why l use her surname but she did not want to tell me.It was the deepest secret that my mother ever kept from me.

She told me that she was going to let me know when i am old enough.l was curious to know the deepest secret of my mother.My aunt was not happy with my mother and her brother's marriage.When her brother got married to my mother,she tried to seperate them  but failed.

Fortunately,her brother knew that she was trying to separate his relationship with my mother. Upon realising it,he was hurt and he told her sister that they were nolonger related.

Killing her brother was also part of her revenge to my family.Her aim was that she wanted me to know the real defination of pain and life of hardships. Little did she knew that she was making me strong by doing all those things to me.

She was leading me to a bright future because the more she did things to hurt me the more l was getting stronger.Her wish was to make my life miserable.

The only way for her to do that was to destroy my family. She knew that my family was everything to me.My family was my everything because they supported and loved me. They were also the ones who were able to lead me to a bright future.l coud not afford to lose my family.

Therefore my aunt knew that if she destroy my family,l was going to get hurt and that was going to be the end of my happiness. Unfortunately,death caught her before she fullfiled her darkest assignment.

l wish l knew that she was the cause of  all the problems that my family  encountered before she was about to  die. Nevertheless i just let bygones be bygones and focus on releasing my innocent mother out of prison.l searched for a lawyer to help me in supporting my mothers innocence.The best part of it was that l recorded everything that my aunt confessed to me and that is what l used as evidence to prove my mother's innocence.

l showed my braveness and intelligence therefore both of these tools made me succeed in releasing my mother out of prison.Momy was happy to see the sun rise again after seven years behind bars.

l was also happy because l managed to fulfil my fathers last words of taking care of my mother even though it took me couple of years to complete the script.It may take time to arrive where you are going when using a road with potholes but your arrival is what matters.

Similary to what l did inorder for me to fullfill my fathers last words of taking care of my mother.It took me years to fullfil them because of the problems that l was facing in my way,but what matters is the fact that l managed to fulfil them at last.l began to live with my mother in my metrimonial house.

Joy overwhelmed my mother when she saw my twins and her son inlaw.My husband was okay with the idea of my mother to staying with us.That made me realise that my husband was a very kind person.

Sometimes when you think that you have finally meet the destination of your problems,like phoniex some problems comes up.They will be complicated than the ones you have ever encountered before.

That gives us a clear sight of how unexpectedly life changes and to also realise how strong we really are.When my mother met my mother in law,l realised that she was the best friend of my late aunt.l did not know that all the time but my mother was the one who let me know.

My mother and my mom in law knew each other dating back to the days when evil aunt was still alive.When my mother in law whose name was Ayesha realised that l was related to my late aunt,the horror began.Her plan was to fullfil her best friend's wish who happened to be my aunt even though she was dead.My aunt's wish of destroying my family.

Fortunately,at that time l was strong enough to fight for my remaining family my mother and little sister.l was willing to risk my life for them. l then became Ayesha's spy since that was the only way for me to know her moves.l was hurt and shattered the day that l became to know her plans.Evil mom in law was planning to end my mother's life and to send my little sister in prison.

She paid thousands of dollars to three men who she hired to end my mother's life. Ayesha's plans transformed me into a monster.

l was willing to do anything  to save my mother's life and protect my little sister from getting sentenced to the prison.When l told my mother about Ayesha's plan,fear of death gripped her like a fever.l made her believe in me and promised that l was going to do anything it takes for me to conquer.

Luckly, Ayesha did not know that l was her spy. l informed the police about the horror that Ayesha was planning to do. When the day that she was planning to kill my mother arrived, l reminded the police.They had planned to kidnape my mother and take her to an unknown forest.l let her and her gang of 3 men succeeded in kidnaping my mother because l wanted to prove the police that l was telling them the truth.The best part of it was that they did not realise that the police and l were following them.

When they arrived to the forest,they took my mother out of the car and started beating her.My mother cried like a baby thrown in a dump site.By the time the police and l arrived,my mother in law was holding a gun pointing it to my mother.l emotionally dashed out of the car and advanced towards my mother.

l then stood in front of her protecting her life. She threatened the police that if they handcuffed her she was going to shoot me.When Ayesha was threatening the police,she was facing to the opposite side of where l was standing because that was where the police was standing.

Even though she was facing the opposite side, she was still pointing a gun to me.The other three men who she was with escaped at that time.I finally got a chance to pick a wooden stick that was near me and without hesitation i struck her with my endless super power on the head.She screamed and  short at my right leg before she lost consciousness.l swam into a pool of pain.

Even though l was in pain ,l was happy because l managed to save my mother. An ambulance was alerted,my mother and l were taken to the hospital.We were both seriously injured.When Ayesha lost her conciousness,she was taken to the police station and that was where she regained her strength.

He then let his mother know that she was not worthy to be his mother because she ruined their family's reputation.The police still had unfinished business.They launched an investigation to search for the three men who had gone into hiding.They were nabbed after a year in United states of America.They were also sentenced to life in prison.

My husband apologised to my mother and l on behalf of his mother. We forgave him since it was not his fault.  After all he knew nothing about his mother's hatred towards us.When l forgave my husband,he threw a family party dubbed back together.

There was nothing to worry about any more,our enemies were punished and they were out of our lives forever.It seems as if they came to make me realised how strong l was.When our enemies were no more,our sorrow and pain disappeared forever.

The pain was turned to everlasting happiness. We started to live a life of happiness ever after and my family  never faced any problems again.My moment finally came and l had a beautiful wedding with my husband.My mother was so proud of me.She was the happiest person on earth that day.

What l was proud of was that l was able to fullfil the last words of my father at last.l managed to take care of my mother and worked hard for my success.l also faced problems that l encountered in my life without fear and l conquered defeat.Avni and her family's life changed unexpectedly when they lost their father.

They started living in pain and sorrow to the extent that they were not
expecting to live in happiness again. They also faced problems that were difficult to solve but there is no problem without solution.

The best part of it was that Avni managed to solve them,at last after the  the death of her beloved ones who happened to be her father, little sister and brother.Every beginning have an end.
**********THE END**********