African Reality: IN LOVE WITH AN ENEMY 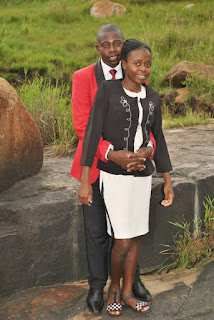 Welcome to the continuation and season final of the grandest storyline,in love with an enemy. Certainly hoping the story was educational and exciting. If you haven't read the first chapter click Here Enjoy and kindly share with others.We continue the storyline in 3,2,1

Even though Esha did not finish school, she was naturaly intelligent.Instead of rushing to the police station with the evidence, she exposed it to Akim's relatives and parents.When Akim's parents heard Ben's confession, they exploded like a dynamite in anger.

They rushed to the police station with  Ben's confession.Esha helped the police by leading them where Ben lived. By then Ben and Elsy were celebrating the bithday of their child who had turned a year old. They named her Emy.

The police arrived at  Ben's house and he noticed he was in danger.As  the police was advancing towards him,his heart started beating like drums being played on a rain making ceremony.He knew that his deepest secret was revealed. The deadliest secret of ending Akim's life who happened to be his ex wife's husband. Ben tried to look for refuge but it was too late.

The police finally handcuffed Ben and sent him to the prison. Ben found himself in a place where the sun doesn't shine as his parents,wife and a lovely child witnessed their loved one in his demise. As Ben was behind bars,his parents sought for lawyers.

Fortunately they succeeded with their plan of looking for a legal practitioner. Judgement day finally arrived and Ben was taken to court. As Ben entered the court room everyone stared at him like a conjuoror who was about to play a trick. The court session proceeded,for Esha's good Ben's parents efforts were in vain because he lost the case.

Ben regreted killing Akim when he lost the
case  because he was sentenced to life in prison.As you know every ending has a new beginning. Akim's parents were proud of the help that Esha gave to them.They  thanked Esha by helping her fullfil her dreams of finishing her studies.

Esha returned to School and went to University to study law. She managed to get a degree in law and finally her dreams came true. Esha faced the problems that she created through her mistakes  and she conquered defeat.

People change as they know each other better.Others change to be enemies whilst some change to become the most important people in life. After all enemies come in different ways.

They Usually come unexpectedly.What hurt the most  is when a person whom you love whole heartedly becomes your enemy just like what Ben did to Esha. He forgot that every problem has a solution and decided to deceive Esha when  he realised  that she was barren.He just  rushed into conclussion instead of standing and supporting his wife.

Esha also became Ben's Enermy when she exposed his confession which led to him getting sentenced to life in prison.After all
Esha did that to protect her happiness and to get a chance of fullfiling her dreams.If Ben was around Esha's chances of making it was very rare.

Esha was not going to fullfil her dreams since Ben wanted to see her suffering.He was becoming a monster and the devil's favourite demon. Well at last Esha and the society was finally safe as Ben rotted in prison.