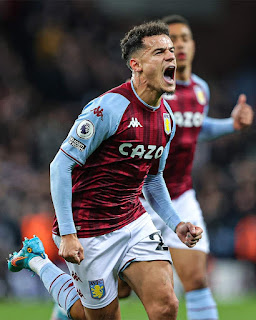 The Brazil international withstood a challenging time at Camp Nou prior to making the short-lived switch to Aston Villa in January.Philippe Coutinho says he does not regret his choice to leave Liverpool to join Barcelona.

The Brazil international spent almost 5 years with the Anfield side before agreeing to sign up with Barcelona in January 2018 in a deal worth an overall ₤ 142 million.

Regardless of an intense start to life at Camp Nou, he struggled to keep his place in the starting XI and was quickly lent out to Bayern Munich.Coutinho made 106 appearances total for the Catalan side before leaving for Aston Villa on loan in January.

Asked if he is sorry for leaving Anfield in the first place, Coutinho informed ESPN: "No. At certain times we have to make decisions, and one of my big dreams was to play for Barcelona.

" At that moment I chose to make that choice, but always with fantastic affection, respect and thankfulness for Liverpool and for the friendships for many years I've been in the club." At that minute I had a choice to make and I do not regret it."

Coutinho thrilled to reunite with Gerrard

The 29-year-old's return to England saw him link up with his former Liverpool team-mate Steven Gerrard at Villa.The legendary midfielder was designated the club's head coach in November and Coutinho says it is an honour to be working with him once again.

" I constantly appreciated him a lot. For me, it was an honour to have actually played with him," he stated. "Now having him as a coach, with the experience he has, training has actually been strong and demanding.

" He has excellent ambitions, I more than happy to be here and I hope to react to what he anticipates by assisting our team to accomplish our goals." For me, it was an honour to be part of his profession as a player, and now, as a coach, I feel even more honoured.

" I have constantly had this relationship of adoration and respect. I want I had that chance to work with him once again. He's a person who's very open up to all players and has a lot of influence in the group."