Cody Rhodes still to sign WWE Deal on the Table 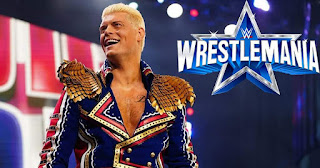 Cody Rhodes' WWE future continues to be unclear. Soon after he and Brandi Rhodes announced their departure from AEW, reports started appearing that "The American Nightmare" was on his way back to the WWE, possibly in time for a match at WrestleMania 38 at the start of April. Nevertheless, neither he nor WWE have confirmed a signing and insider reports began becoming increasingly limited. A variety of reports dropped over the weekend suggesting Rhodes was no longer in the plans for WrestleMania and was not listed on interior files, but nobody was able to verify if Rhodes' strategy to return to WWE had failed.

Dave Meltzer supplied an update this week via the F4W message board, composing, "Negotiations hit a snag. He has multiple deals. He has to make a decision. WWE desires the decision made soon for obvious reasons. The ball is in his court."

AEW president Tony Khan offered some more insight into why Rhodes left the business last week, saying that he and Rhodes were unable to come to terms on a new longterm deal. He said throughout a media conference call, "I don't wish to get too deep into it because a lot it's individual between me and (Cody) however I attempted to reach a longer agreement with him beyond what we had for the choice years. And it sounded like at one point I believe that we were going to, honestly, and when we could not decide on it, the last thing I want to do is keep someone here who isn't gon na want to be here so it didn't look like we were gon na get a longer deal done.

" I would've liked to have actually done it and I have a lot of respect for him however when we didn't pertain to terms on that it made it quite clear where we were gon na end up on things," he added. "That being said, I said nothing but respectful stuff about Cody and I'll continue to."

Khan also discussed that he has no intent of filling Rhodes' backstage executive vice president role however does plan on getting a new Chief Branding Officer to fill the role left by Brandi.