'Thank you a lot to the Premier League!' - Arteta slams schedule-makers for 'unfair' run of games 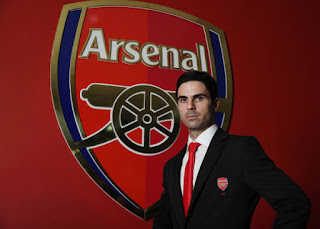 Arsenal manager Mikel Arteta feels his side have actually been treated unfairly by the Premier League by being handed a busy fixture list.After losing 2-0 to Liverpool on Wednesday, the Gunners will play their third match in the space of six days when they handle Aston Villa.Next month the north London side will have another tight run when they will face Chelsea and Manchester United three days apart.

" And they've done it once again when we need to play Chelsea and Manchester United. So if they wish to provide any advantage, I say to them today: 'Thank you so much for doing that'.".

He included: "No [the Premier League would not alter the schedule] It is always it's BT, it's Sky, it is this, it's that. But the one that is impacted is Arsenal and the only thing that I care [about] and we care [about] is Arsenal. And for Arsenal it is not fair.".

Despite the hectic duration, Arteta says his players will be ready to go against Villa.
" Yes, 100 percent. Don't stress the players on Saturday they will be there, with energy," he said." They will eat, sleep well, but thank you so much to the Premier League for putting the fixtures like this. Very, really useful.".

Goals from Diogo Jota and Roberto Firmino saw the Gunners lose 2-0 to Liverpool on Wednesday, moving the visitors up to one point behind Manchester City.Arsenal are still in 4th place in the table and sit a point ahead of Manchester United, but Arteta's team have two games in hand. international break will follow the clash against Aston Villa at the weekend, after which Arsenal will take on Crystal Palace on April 4.