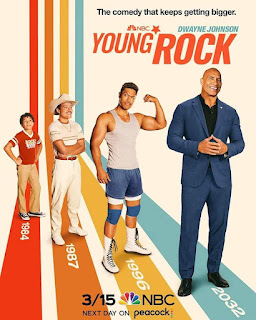 Young Rock, the NBC series centering around three periods of Dwayne "The Rock" Johnson's training, is set to premiere its second season on March 15. In between the casting and the promotional pictures, it has been revealed that the second season will move towards Johnson's early days in the professional wrestling business while working in the United States Wrestling Association in Memphis in 1996. Chavo Guerrero, who worked on the series as its wrestling organizer, confirmed with Wrestling Inc. today that an AEW star will appear on the show this season.

" It's only beneficial to whatever company I wind up at because the jobs that I am dealing with are typically all wrestling jobs. So I have the ability when they begin casting, whatever company I am working for, get their men looked at. It's a no-brainer," Guerrero said. "In reality, I do not wish to say who it is, because I don't think I can speak about it yet. But for Young Rock season two, I assisted cast a guy from AEW on it. I will not state a name yet, but he played a fantastic part and he was amazing. But that was a great working relationship, because I was like, 'oh AEW, ideal.' It works terrific.".

Guerrero, who was recently pulled from AEW's roster and called out Tony Khan over it in a since-deleted tweet, stated in the interview that he's now keeping his choices open in regards to dealing with either WWE and AEW. Outside of wrestling, he has actually worked on different films and shows like Peppermint and GLOW.

" I keep it open. I have been the one to close some doors before with the Guerrero attitude, the Guerrero rebal-ism if you want to call it. That we all acquired from my daddy, Chavo Sr," he claimed. "But, I have actually kind of learned from that. I am simply keeping whatever open and it's completely great. I am open to deal with AEW, I am open to work with WWE. Whatever, it is fantastic. I am still the wrestling man in Hollywood, so I've got other jobs coming on there.".