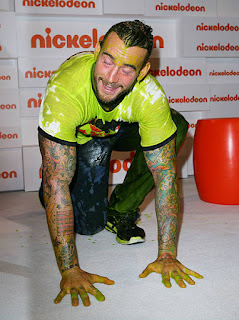 Mayans M.C. and wrestling fans were both stunned recently when AEW star CM Punk made a surprise appearence on the show as Paul, a military veteran and old friend of Gilly Lopez (Vincent "Rocco" Vargas). Later on in the episode, it was revealed that Paul was fighting with PTSD, which was followed up today by a dark scene where he asked his young child to kill him before Gilly and his better half separated the two. The character is a severe departure from Punk's previous functions and his persona in All Elite Wrestling, but he was incredibly grateful for the chance provided by showrunner Elgin James.

" I've known Elgin for lots of years, [a] mutual friend and simply like-minded individuals. Same interests, quasi-same backgrounds. We kind of come from the exact same location. Various kids, however same situations, and I think it was just a matter of, 'Man, I actually desire to work with you,'" Punk informed ComicBook on Wednesday. "He actually wanted to work with me, and he's been doing the Mayans thing for a while and it really felt like an ideal fit. I'm lucky that he thought so, I'm lucky for this role. I'm very grateful to Elgin and everybody on Mayans. Everyone has been incredibly fantastic, and to me, the program's just so big. It's enjoyable to be a part of something that has this whole fanbase and universe.

" It's a little bit different than what I'm usually utilized to doing. However yeah, me and Elgin go back for a minute and goes to reveal you it's not what you know, it's who you understand," he included.

2 episodes in and we've discovered quite quickly that Paul is a tragic character. When you were provided the role, did you see it as a chance to extend your acting muscles and play a different kind of character?

100%. I think that's the fun feature of acting, is you really discover who's great and who's not when you get put in situations where people don't expect to see you in. I'm sure a great deal of people enjoy wrestling and watch Mayans. There are crossover fans, and they didn't anticipate to see CM Punk on the screen playing Paul. I get to see people a bit differently. But also man, what a story to be able to tell. It sort of hits home for me because my brother-in-law remained in the armed forces and he served overseas, therefore to be able to inform a story of a tragic character, but just a character, in general, that has PTSD and these things that are taboo and you're not supposed to talk about, and I truly seem like we all should be discussing it. And the fact that they trusted me to be a vehicle for this is quite heavy and I absolutely didn't take that for approved.

Remaining on the subject of acting, you pointed out years prior to Heels got off the ground that you auditioned for the role of Jack Spade (ultimately played by Stephen Amell). How different was your interpretation of Jack compared to what Stephen eventually gave the program?

That's type of a hard question to answer because what Heels was and who Jack Spade was at that time, you didn't really get into the weeds of it. I couldn't have told you Jack was wed. I could not have told you his kid's name. It was concentrated on a couple of scenes and possibly one loose script, and it had to do with the wrestling and the relationship in between Jack and Ace. So there were a couple of scenes in the first season that I was like, "Hey, I keep in mind that." But it's an entirely different animal. It took on an entire different life. So you can't really compare the two. Perhaps 5% of what I did and I experienced when I read for Jack I saw on the first season.

You're nine months into your run with AEW and you are challenging Hangman Page for the AEW World Championship in the main event of Double or Nothing. Has the run been what you expected?

This run has actually been more than what I anticipated. I had expectations. They were pretty high. Up until now, they've practically shattered all that, which's just based on analytics and varieties of how well we're doing. I've long stated that I'm there for the fans in the building. Nowadays everyone is still concentrated on ratings numbers when cable is absolutely-- I canceled DirecTV months back. I just, I could not do it anymore. It's too convoluted. It's too costly. Streaming services are, I feel like, are the future. So when individuals take a look at scores and state that wrestling is dying, I state, "Well look at our buildings. We're offering out and we're doing our first million-dollar gate." So I do not associate that simply to me. I attribute that to the spirit of AEW and everybody behind the scenes that makes it all work and makes it all click.

However the run, my run specifically, my things as a whole, I've never been better in a wrestling ring. I've never ever, to me, been informing more fluid, better, reality-based stories. It's been a genuine treat.

You guys are heading back to Chicago for AEWxNJPW: Forbidden Door on June 26. There's a man over in New Japan that keeps calling you out on Twitter every opportunity he gets and that's KENTA. Does that match interest you at all?

Do you have any concepts floating around in your head for another story if Marvel asked you to write another comic?

I'll have a nervous breakdown if I need to write a comics while handling all these other jobs I'm doing. But yeah, there's constantly concepts. I constantly talk openly about writing for a Punisher story. But I believe the fantastic thing about my things for comics was they approach me when they have an idea and they go, "Hey, we desire you to write Drax," and that's, it's not a book I ever thought [of] I do not have ideas for Drax. However then when you're presented with an opportunity, it gets the wheels turning and the juices begin flowing. They did the exact same thing with Shang-Chi. They're like, "Hey, we're doing a Shang-Chi one-shot and we believe you're ideal for this," and I responded, "Of course.".

So I like in that context where they can pertain to me with various things and it's not always anything that I ever believed that I would remain in a position to do, and to me that's when the creativity truly sort of begins. I believe any person can be like, "Yeah, I have this one story in my head and it's Punisher," or, "I actually wish to write a Batman story." That's easy. However when they come to you and they're like, "Hey, we're going to, can you do a Ra's al Ghul one-shot?" You 'd respond, "What? Oh man, I never considered that," and you 'd be amazed what your imagination can do.

Last thing-- this newest episode left Paul in a quite dark place. Can you give us any indication of what's next for the character?

I'm hoping they wish to continue this story. I don't desire to hand out much. That's the other funny thing, right? It was a huge surprise that I was on the show to begin with due to the fact that I didn't inform anybody because I don't desire to get into a  problem. I do not wish to. I'm not posting photos on Instagram or anything like that.I don't wish to get chewed out by production.

So I believe we're all on this trip, and I specifically wish to thank Vincent Vargas who plays Gilly because this is, in such a way, this is type of his story. He served. He remained in Iraq and Afghanistan, and this all does not happen without him, and the way he wears his heart on his shoulder and the bravery for him to be able to kind of write comparable situations or mention them, things that have in fact occurred to him. I only hope it's cathartic for him to be able to do this on screen, and again, my honor to be that guy, that vehicle, that he utilized to inform the story. Hopefully, I did all best and Paul stays. I believe it's a quite fascinating character and we get to tell those stories about people that may not constantly get to be heard.