EU to back Zimbabwe in a bid sell $600M worth of ivory? 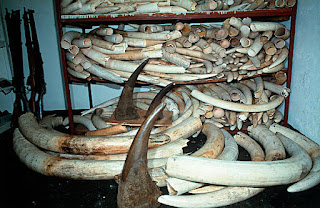 Zimbabwe on Monday sought the support of the European Union to sell off US$ 600 million worth of ivory it has accumulated due to the global restriction on the sale of tusks.International trade in ivory has been prohibited since 1989 under the Convention on International Trade in Endangered Species of Wild Fauna and Flora (CITES).

Zimbabwe Parks and Wildlife Management Authority director-general Fulton Mangwanya told EU ambassadors to Harare that the country has 163,000 tonnes of ivory and 67 tonnes of rhino horns in vaults.

He estimated the worth of the ivory at around $600 million.

"The burden of managing a stockpile that we can not obtain financial value, or plough back into the communities and preservation of the very same species is rather a terrific pain to us," he said.

"We kindly ask for the support of the EU for Zimbabwe to be allowed an as soon as off sale of our national ivory stock," said Mangwanya.The EU diplomats were handled trip of the vaults in Harare.

Mangwanya said if enabled, the funds would be utilized to benefit local communities living around animal conservancies.

The nation can support as much as 55,000 elephants but the population has more than doubled to 100,000, according to officials.

Elephants have up until now this year killed 60 people, in a preservation success story that has resulted in increased conflict with human beings.But the plea did not right away gather support.

"Conservation and avoidance of prohibited wildlife trade is a global problem because of the involvement of criminal syndicates in illegal wildlife trade hence there is requirement to reinforce global cooperation," the Swiss ambassador Niculin Jager responded on behalf of his associates.

But that demand was rejected by a CITES meeting in Geneva in 2019.