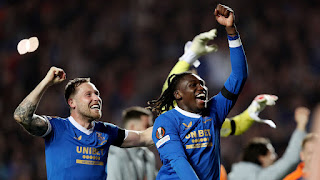 Rangers penned another chapter of success in the club's history as they reached the Europa League with a helter-skelter 3-1 victory at home to RB Leipzig on Thursday night.

Played to the backdrop of an Ibrox that was rumbling from the very first whistle, James Tavernier triggered an eruption as he tapped in an 18th-minute opener, pushing Rangers ahead on the night and eliminating RB Leipzig's first-leg lead.

Ryan Kent rolled the ball across goal for Tavernier to sneak in unmarked after Glen Kamara pivoted away from Kevin Kampl in midfield. The Finland international promptly followed up his cameo role in the first goal with a simple and easy stroke into the bottom corner to put Rangers ahead on aggregate, crisply rounding off a slick passing sequence which started with a high press that was indicative of their front-foot approach all over the pitch.

Joe Aribo almost trebled the hosts' advantage inside half an hour. As Tavernier nodded down Borna Barisic's cross at the back post, the makeshift forward swiped at the ball within the six-yard box however hardly connected with his weaker right foot.

While the crowd hardly slow down, the players in blue eased off the throttle after the period, increasingly delivering possession to Leipzig while moving into a 5-4-1 off the ball.

Rather than irritating the visitors, Rangers' passivity and permeable shape offered Leipzig sufficient chance to select passes in the plentiful space between the lines.

Seconds after Konrad Laimer was denied by Allan McGregor, Leipzig levelled the incorporate the 71th-minute as Christopher Nkunku silkily volleyed in Angelino's cross.

Rangers somehow hauled themselves off the canvas within the area of 10 minutes. At the second stage of a set-piece, Kent was again at the heart of the Gers' threat, tossing in a high ball which Josko Gvardiol shakily nodded into the six-yard box, sitting up for John Lundstram to stride forward and slot his side back ahead.

Influenced by the surprise passing of the club's long-serving and much-loved package man Jimmy Bell, Rangers hung on to reach their first European final since 2008.