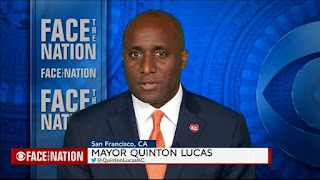 Kansas City Mayor Quinton Lucas (D) on Sunday promoted for tougher gun laws to protect citizens in a host of public spaces in response to mass shootings that have plagued the U.S. in current weeks.

" We require stronger and tougher laws to safeguard our children," Lucas said. "Protect our grocery stores, safeguard our law enforcement officers. If you back the blue, you back sensible weapon reform."

In response to a question about Sen. Pat Toomey (R-Pa.) saying that no promises should be made when it comes to bipartisan talks on gun-related legislation, Lucas stated that it was unfortunate numerous Republican talking points on the concern include implicating local Democratic authorities.

" I'm exceptionally disappointed to hear this huge set of ideas that they have and then basically just thrown up their hands and blaming it on prosecutors, fathers not being in the home and a variety of concerns other than gun violence in our cities," Lucas said.

When asked whether it worked to have school districts that allow personnel to carry guns in classrooms, as Missouri allows, Lucas said: "No, no, it does not."

Brennan consistently referred to gun violence in the city, with the FBI ranking it as the 8th most dangerous in regards to murder rates. When asked what a locally-driven solution might be, Lucas pointed to a measure that curbs access to guns by domestic violence wrongdoers.

" [P] revention is probably the most essential step not just to local weapon violence that we see every day, however likewise mass shootings. If you simply have people showing up after a scene, as we've seen, tragically in Uvalde, and around America, then we will never get in ahead of this issue," Lucas stated.