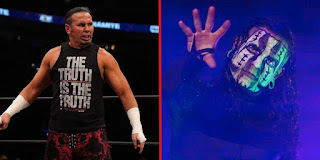 Jeff Hardy's health was a subject of concern for AEW fans this week. The renowned tag team wrestler appeared to be out of sorts during Sunday's match between The Hardys and The Young Bucks at Double or Nothing, then was pulled from a set up 10-man tag team match on AEW Dynamite due to an unidentified injury. Matt shed some light on the scenario throughout this week's episode of The Extreme Life of Matt Hardy, which drops on Friday.

" Yeah, I enjoyed with the match, particularly thinking about really early on in the match Jeff was almost knocked out. So he got hurt pretty bad. That's why he's being pulled from the match in Los Angeles, certainly. So he was type of operating on fumes going through the match. He still held up his end of the deal quite great in the big scheme of things," Matt described (h/t Fightful).

Matt went on to explain that Jeff can't remember what took place in the match, which saw the 2 veterans defeat The Bucks. The elder Hardy was then on the losing end of the 10-man tag match as Matt Jackson pinned Jungle Boy on Dynamite.

" He doesn't keep in mind the match at all after that happened, so thank God The Young Bucks are The Young Bucks and I'm me and we were-- he was literally just a vessel being given instructions throughout the match to kind of do what he was supposed to do.

So considering he truly got knocked loopy terribly at some time previously in the match, he still did respectable to go through and do whatever he did. It's so funny that he's simply still such a great professional athlete therefore proficient at what he does. If you're looking at the Swanton he does on the stairs, he still does it perfectly and he didn't recognize he was expected to do it till he was told he was supposed to do it," Matt said.

AEW goes back to pay-per-view on June 26 with the Forbidden Door event at the United Center in Chicago. The AEW/New Japan crossover currently has its first match verified in AEW World Champion CM Punk handling "The Ace" Hiroshi Tanahashi.