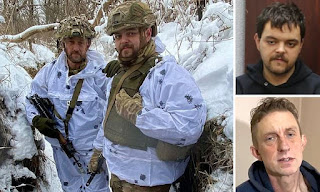 2 British men captured by Russian forces and accused of being mercenaries have actually appeared in court on charges that carry a possible death sentence.Aiden Aslin, from Newark in Nottinghamshire, was seen in a Telegram video along with Shaun Pinner, from Bedfordshire, and Saaudun Brahim from Morocco.

They are being kept in the self-proclaimed Donetsk People's Republic, a breakaway region in Ukraine's east.

The men state they were serving with routine military units in Mariupol, so should be secured as prisoners of war by the Geneva Convention.A third Briton, Andrew Hill, also faces charges after being captured in the Mykolaiv area. His affiliation is unclear.

The president of the Donetsk People's Republic, Denis Pushilin, has actually accused the men of "monstrous" crimes, such as trying to take power and crimes against groups of people.

He said their trial would open at the region's supreme court.Mr Aslin's family said on Tuesday that it was a "extremely sensitive and psychological time" and that they were dealing with the Ukrainian government and UK Foreign Office to attempt to free the 28-year-old.

"Aiden is a much-loved man and very much missed out on, and we hope that he will be released soon," they stated in a declaration.The previous care home employee joined Ukraine's armed forces as a marine in 2018 and has actually looked for citizenship, and has a Ukrainian bride-to-be.

Mr Pinner was filmed in April saying that he had actually been captured while defending Mariupol, his adopted city.

His family worried at the time that he was "not a volunteer nor a mercenary, but officially serving with the Ukrainian army".

The 48-year-old told Sky News a couple of months before that he was on his 4th tour of duty in Ukraine after serving in the British Army for nine years.He has actually resided in the nation since 2018 and has a Ukrainian other half.

Deputy Prime Minister Dominic Raab said on Monday that the British government expected "the laws of armed conflict to be represented" and the Foreign Office would make "all the representations".

Russia's present focus in the war is to capture the eastern Donbas region, comprised of Luhansk and Donetsk.

Separatists unilaterally established 2 breakaway republics there in 2014, however they aren't recognised by Ukraine.