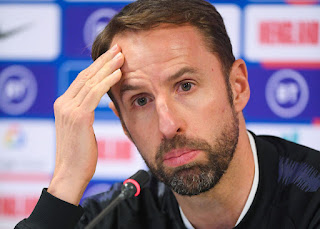 Gareth Southgate has cautioned his missing out on Manchester United contingent that they deal with a fight to regain their places for the World Cup as he expected the obstacles of an extraordinary mid-season tournament, which starts on 21 November.

The England manager is getting ready for the fourth and last game of the end-of-season Nations League program against Hungary at Molineux on Tuesday night. But his thoughts are increasingly focused on fine-tuning his team for Qatar-- expected to number 26 players rather than the typical 23-- and how he will handle what he called the "unusual lead-in" to the finals.

During a look through the possible minimal gains, Southgate was asked whether United's absence of Champions League football next season may leave their England players a bit fresher. "We've only got one with us," Southgate shot back, with a nod towards Harry Maguire. "They've got a lot to do to get back in the team."

Southgate was describing Luke Shaw, Marcus Rashford and Jadon Sancho-- the former out of the picture because of injury, the latter pair left out because of poor form. Shaw, too, has had a disappointing season, although with Southgate without an identified left-back-- Chelsea's Ben Chilwell only returned on the final day of the season for his club after a six-month cruciate knee ligament injury-- Shaw would appear to have a clearer path back.

Southgate was remarkably unsympathetic towards Rashford when he dropped him for the March party, keeping in mind pointedly that the forward had actually withdrawn from six of the previous eight squads. He called the choice to exclude him and continue to neglect Sancho as "relatively straightforward."

It is not an expression that Southgate would utilize in relation to the World Cup countdown. After the Hungary game, his players will primarily have just three weeks off prior to reporting to their clubs for pre-season and the matches will come thick and fast once the new campaign begins. The Champions League group stage, for example, will be squeezed in from 6 September to 2 November.

Southgate said there would be "midweek fixtures weekly, whether that's a number of League Cup weeks, absolutely six European weeks and midweeks with Premier League games." He added: "It's manageable but the needs on the players are huge and we are all conscious that we can't keep contributing to the calendar.

" We are still paying the price of Covid, actually having 3 games in international windows, four games now [in the Nations League], partially due to the timing of the World Cup because we lose the October camp so everything's condensed. I am sure certain players are acquiring more of a voice in this and naturally so."

England have only one more camp before they leave for Qatar on 15 November-- they play Italy (away) and Germany (home) in the Nations League on 23 and 26 September. The Premier League will stop briefly after the fixtures on the weekend of 12-13 November.

Southgate raised a potential issue before the World Cup when he wondered what would happen if a club had an England player with an injury. Would they want to keep the information in-house, rather than tell the Football Association, for fear of it leaking to their upcoming challengers?

Southgate will submit a long list of players to Fifa on 21 October, although it does not need to be made public. He is expected to announce his final team on 9 or 10 November. The Fifa due date is Monday 14 November, when England are set to meet up.

Southgate admitted he would have no control over the players in the weeks leading up to the Premier League time out. "Information sharing is pretty good medically and we get the efficiency data from the Premier League so you've got some markers," he said.

" But similarly there's constantly an understanding that clubs that have big games may not wish to share certain things too early if they've got players that might miss games. In general we have decent relationships with the clubs on that things but there's always going to be a bit of an aspect of the unknown because duration.".

The Premier League fixtures for next season are to be released on Thursday-- the very first game will be on Friday, 5 August-- and Southgate hopes that there will be no enormous games on the weekend of 12-13 November. Certainly, the FA have made that specific request.

" We have asked the Premier League to have to consider things but we also understand that the fixture program is extremely made complex," Southgate stated. "We 'd prefer none of those huge games [on 12-13 November] but to be sincere the difference it's going to make is relatively marginal.

" It could assist us, perhaps, with a medical report. If a team played Saturday, it would offer us an additional day to evaluate. Due to the fact that we're going to need to meet on the Monday and fly on the Tuesday. We're going to have to make actually fast choices on medical situations, in particular. So that's the only thing that we're taking a look at that might help us. We understand the landscape however we 'd be foolish not to ask the question if it could make a difference.".