Will this be Rick Flair's fenale match? 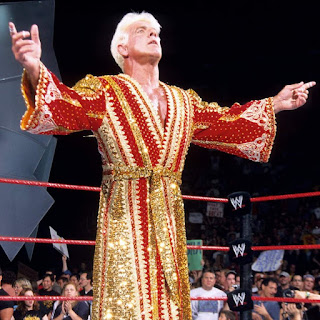 Ric Flair's initial retirement match against Shawn Michaels at WrestleMania XXIV is regarded as a WrestleMania classic and was considered at the time to be a fitting end to "The Nature Boy's" legendary career. Regrettably, due to financial problems, Flair was back in the ring simply one year later working a handful of matches against Hulk Hogan on an Australia trip.

He then signed with TNA (now Impact Wrestling) in 2010 and would go on to battle 12 more times, the last of which was a televised match versus Sting in September 2011. And while the Flair vs. Sting rivalry was so famous that it was picked as the final televised bout in WCW history, few even remember that this last match happened.

The 16-time world champion revealed earlier this year that he's going to get back in the ring for one last match at 73 years of ages. Dubbed Ric Flair's Last Match, the event is set up to take place inside the Nashville Municipal Auditorium on July 31 and will accompany the Starrcast V fan convention and the one-night revival of Jim Crockett Promotions. Flair's challenger hasn't been verified for the show as of yet, however he currently understands what he's looking for from the match in order to consider it a fitting finale.

" It needs to be actually great, it needs to be much better than anything I did after Sean Michaels," Flair told ComicBook in a current interview. "It's not about the money. It's everything about re-establishing the reality I have my self-confidence. It's never ever been higher. Back then, at that time, I was still having confidence problems and I was paying out (for his divorces) more to three people and needed to go to work. Now I don't have to do anything.

" But it gave me a goal," he continued. "I've been working out. Kelly (Brewster) and I interacted, as partners in this (his approaching comics series) but she also trains with me and it's a great deal of effort. We drive 45 miles as much as John Cena's place in the early morning for an hour and a half. And then we go down to Saint Peak to training like there's no tomorrow for two hours and it's a lot more fun for me if I have somebody to compete against.".

Flair finished by saying, "I love wrestling. I'll never get it out of my system. I simply want to have a much better match and go out on a greater note than I did last time.".