Home WRESTLING WWE The beast returns,U.S Open Challenge up for stakes, what to expect on tonight's WWE Raw

The beast returns,U.S Open Challenge up for stakes, what to expect on tonight's WWE Raw 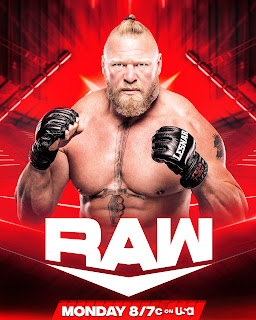 WWE has actually verified today's Monday Night Raw will see Brock Lesnar back on the Red Brand ahead of this month's SummerSlam pay-per-view. "The Beast" had actually stayed off television following his loss at WrestleMania 38 however recently popped back up on SmackDown to start yet another program with "The Tribal Chief." The two will clash over the Undisputed WWE Universal Championship in a Last Man Standing match that keeps getting billed as the final confrontation in between the two. However whether or not WWE sticks to that claim remains to be seen.

As for what he'll be doing on Raw, there's a great chance Lesnar will have some sort of interaction with "Mr. Money in the Bank" Theory. The young rising star has been teasing that he'll capitalize either Reigns or Lesnar at SummerSlam and is currently booked that night for a match with Riddle.

The other big headliner of the show will be an open challenge for Bobby Lashley's United States Championship. "The All Mighty" won the title at Money in the Bank and is scheduled to face Theory in Nashville.

There's likewise still the elephant in the room concerning The Wall Street Journal's newest report on Vince McMahon, which brings the total number of supposed sexual misconduct scandals just recently directed at McMahon up to four Unlike when the first report came out, McMahon did not appear on last Friday's edition of SmackDown but did supposedly once again "no sell" the report backstage. McMahon's last Raw appearance came 2 weeks back when he introduced a returning John Cena to commemorate the 16-time world champion's 20 years with the company.

As for SummerSlam, five matches have actually been verified for the show so far. Have a look at the card listed below and stay tuned for full coverage of this week's Raw: