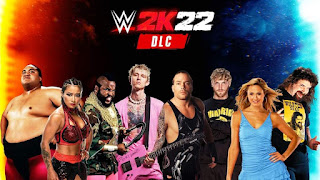 Logan Paul will be a playable character in WWE 2K22, as confirmed by WWE and 2K Sports on Thursday. The lineups for the games various DLC packs dropped as part of a press release and Paul will be available as part of the "Whole Damn Pack" on July 19. The release read, "Regular post-launch content updates through July to include Ronda Rousey, Machine Gun Kelly, Logan Paul, and more. 2K today unveiled the roadmap for post-launch content updates* in WWE 2K22, featuring fan-favorite WWE Superstars, celebrity guests, Legends, and several rising NXT stars making their franchise debuts.

Paul has made a number of appearances in the WWE over the years, most notably at WrestleMania 37 when he was in the corner for Sami Zayn during Zayn's match with Kevin Owens. After Zayn lost, Paul would up taking a Stunner from Owens.

The YouTuber and boxer is booked for WrestleMania 38 to team with The Miz to take on both Rey Mysterio (the cover star of WWE 2K22) and Dominik Mysterio. His appearance in the game resulted in him trending on Twitter on Thursday afternoon.The pack that will include Paul also has Rob Van Dam, Machine Gun Kelly, LA Knight, Xia Li and Commander Azeez. The game is set for wide release on Friday.