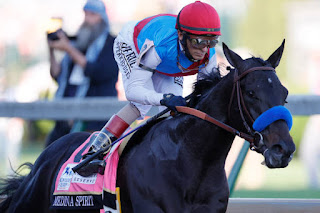 Medina Spirit, who failed a drug test after he won the Kentucky Derby this year, passed away during an exercise Monday morning in California.

The horse collapsed in training at Santa Anita, his trainer, Bob Baffert, validated.

Baffert stated his "entire barn" was devastated by the 3-year-old colt's death.

" Medina Spirit was a terrific champion, a member of our household who was loved by all, and we are deeply grieving his loss," Baffert said in a declaration. "I will always treasure the personal and happy memories of Medina Spirit and his tremendous spirit. Our most sincere acknowledgements head out to Mr. Amr Zedan and the entire Zedan Racing Stables household."

"All horses that die within facilities managed by the California Horse Racing Board undergo postmortem (necropsy) assessment at a California Animal Health and Food Safety diagnostic laboratory under the auspices of the University of California, Davis," the racing board stated.

A main cause of death awaits the results of the assessment and toxicology reports.

The horse checked favorable for betamethasone after the Kentucky Derby on May 1. Betamethasone is a legal medication that is not allowed on race days.

Baffert rejected accusations that he had actually drugged the horse after a split urine test, stating the drug remained in Medina Spirit's system because of a topical ointment.

The controversy left a stain on the traditions of Baffert and Medina Spirit. Baffert was suspended from the Churchill Downs track for 2 years in June.

Baffert demanded extra screening to prove that the betamethasone had come from the lotion, Otomax. The horse was not officially disqualified at the time of his death as the examination was ongoing.

Santa Anita has actually also been subject to investigation in recent years. California Gov. Gavin Newsom purchased an independent evaluation after 29 horses passed away at the racetrack in 2018 and 2019. A report published in 2015 by the California Horse Racing Board cleared the track of criminal wrongdoing, stating there was no evidence of animal ruthlessness or unlawful conduct.

The board did, nevertheless, suggest a series of modifications after necropsies found that many of the horses who passed away at Santa Anita had pre-existing concerns.

A few of the suggestions consisted of a standardized protocol for when to move races off, additional veterinary evaluation, digitizing veterinary records for the horses and more regular testing of track surface areas.