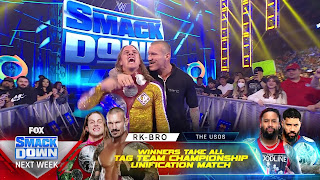 Previously in the night RK-Bro stormed WWE SmackDown and had some shots to deliver to The Bloodline, stating that Roman Reigns constantly bailed The Usos out when they didn't deliver and that they could not make any decisions for The Bloodline. Then Riddle took on Sami Zayn (who has seen himself as an ally to The Bloodline) and defeated him, and The Usos weren't delighted about RK-Bro's words or actions. They chose to come out and react to RK-Bro and their Tag Team Unification Challenge, and they were joined up with by The Tribal Chief too.

Reigns then attended to the crowd and requested for his acknowledgments, and the crowd responded in kind. He then stated "we've been doing this for a minute. You understand the offer. We smash them on Sunday and we come here on Friday to say what's next. Smashed John Cena and said what's next. Smashed Brock Lesnar and came out here the next Friday and stated what's next. This one is a bit different. This Sunday we smashed RK-Bro and Drew McIntyre, and now there's nobody left," Reigns stated.

" No one wishes to step up to the mountain here. The Tribal Chief is untouchable. But you see this is where things get interesting. The Usos, my cousins, my blood, they might have someone next due to the fact that there's an obstacle on the table for these young boys, and the question is what are they going to do about it?"

Jimmy took the mic and then RK-Bro's music hit, with the Raw Tag Team Champions coming to the ring. Orton then stated "I see you smiling Roman however you didn't smash John Cena. Cena is 10 times the Superstar you'll ever be, believe that!" Riddle then said he likes to turn the lights out and set the mood", but Orton cut him off and Riddle said he puts on headphones, and after that he said he goes back and enjoys old matches.

He then stated he viewed the Backlash match where they lost, and that they needed to make the Unification Title match occur. The crowd enjoyed it. Orton then said that Jimmy and Jey have one brain and he was going to say it slow. "Riddle and I want a Tag Team Title match. We want that match because we're going to take your set of Titles and we're going to have both sets of Titles, and when we have both sets of Titles we will have one set of Titles and we're going to call them the Undisputed WWE Tag Team Championships. Do you comprehend the words coming out of meh mouth? I just realized I'm way taller than you by the way," Orton stated.

Jimmy asked if they desired an answer, and stated "We accept", and after that Jey stated "we accept, just not tonight however. Next Friday it's on, and then we'll be the Unified Tag Team Champions." Jimmy then had some parting words and celebrated that they would have 6 Titles after next week, however then Riddle delivers a knee to Reigns' face and he and Orton booked it out of the ring, sending out The Bloodline into turmoil as they left SmackDown. It's now official too, as WWE has revealed that the Tag Team Unification Match will take place on next week's SmackDown.