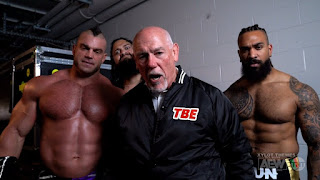 Tonight's AEW Rampage included the unforeseen return of an AEW star, one who hasn't been sighted on TV in a fair bit. That would be Brian Cage, and he made his return as part of a new faction under the management of Tully Blanchard. Tully Blanchard Enterprises got a new roster of three powerhouses, that includes Cage, Kaun, and Toa Liona, and they got an action-packed new vignette to introduce the world to this imposing new group. Regardless of being a big-name pickup when he debuted in AEW, his appearances have actually dropped off considerably for a while. Now he appears to be back in the mix and fans were quite surprised and fired up to see him.

In the video Blanchard introduces each member of the new roster, showcasing how powerful this new faction can be. We're not exactly sure when we'll see them appear personally, but Cage is excited, as he shared the video included the caption "Been far too long, and trust me, I got plenty to do, PLENTY TO SAY, and lots of shit to get in."