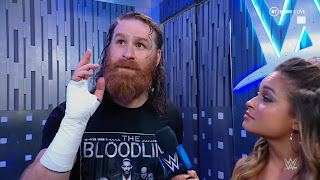 Wrestling veteran Dutch Mantell felt Sami Zayn did a fantastic job during his interview segment when he name-dropped Brock Lesnar.

WWE correspondent Kayla Braxton caught up with Sami and Paul Heyman after the "Honorary Uce" won the money in the Bank Qualifying match versus Shinsuke Nakamura. Zayn specified that he would never cash in on Roman Reigns. Nevertheless, he added that he could capitalize The Beast and strolled off, as The Special Council stared at him in shock and shock.

Speaking on the most recent episode of Smack Talk, the wrestling veteran applauded Sami's mic skills. He detailed that the Master Strategist did the majority of the work throughout the segment while Paul Heyman was quiet and listened, which is really rare.

Here's what Mantell needed to say:

" I kinda liked Zayn discussing that. He wants to win it to safeguard Brock. That was the only interview I've seen Heyman do and he didn't say that. His facials did everything. That makes good sense what Zayn is saying. He can't say cash it in on Brock Lesnar because he didn't want to hear that. That's a respectable interview if you viewed it because Zayn did it all on his own and Paul was simply looking.

The Beast Incarnate sent ripples across the wrestling world when he made his return in front of a capability crowd of cheering fans in Minneapolis, MN.

He strolled down to the ring after Roman Reigns defeated Riddle in a match for the Undisputed WWE Universal Championship. The 44-year-old then continued to plant Reigns with an F5. The Usos likewise faced the wrath of Lesnar as they took succeeding F5s in the ring. Later, WWE announced that Brock and Roman will once again cross paths at SummerSlam in a Last Man Standing match.

While Reigns and Lesnar have had lots of impressive clashes over the years, this SummerSlam encounter has the makings of an immediate classic. It will be interesting to see who captures the gold at the most significant event of the summer season.